After a successful separation of two conjoined twins at Shanghai Children’s Medical Center in China, the little girls still faced critical conditions. But thanks to the skills of the medical team and Getinge’s NAVA technology they survived, as two separate individuals.

As a leading children’s specialist hospital in China, the Shanghai Children's Medical Center is exposed to all kinds of incurable diseases every day. But one day they stood in front of something that is quite rare even for them – two 4-month old conjoined twins who needed to be separated.

The twins were actually found to be conjoined already during a prenatal checkup, but their parents had no doubts in their hearts; they immediately decided to keep the twins, but under close advice and monitoring by local doctors.

“At the time of birth, the daughters weighed just close to 5 kilograms. The names that the parents picked for them were inspired by the meaning of feeling safe and relieved, as they were hoping that the sisters would have a chance to overcome the difficulties and grow up healthily”, says Prof. Jinfen Liu who was leading the medical team executing the surgery.

Magnetic resonance imaging, computed tomography scan and echocardiography showed that the sisters were connected from the chest to the abdomen, with a length of 17cm of the skin from the second sternum to the lower level of the kidneys.

“They shared a common liver, but the hepatic vasculatures and gallbladders were independent. They also shared one pericardium, but fortunately they had their own independent hearts. A carbon-chip experiment showed that the digestive systems were independent, which gave us a good foundation to do the separation”, says Prof. Jinfen Liu.

With the collaboration of various departments at the Shanghai Children's Medical Center, the conjoined twin girls survived the separation and took the first step toward independence and freedom. However, despite the success of the surgery, all organs of the two infants were still fragile. Postoperative care and treatment became crucial for survival.

“The quality of the girls future lives was at that point going to be determined by how well we could prevent lung infection while reducing lung damage and effectively carrying out respiratory function exercises”, Dr. Limin Zhu, the intensivist of these two girls, remembers.

Due to lack of synchronization, the conventional mechanical ventilation mode of treatment risked to increase the airway pressure and cause fatal damage to the babies’ lungs, as well as increasing the risk of man-machine confrontation. 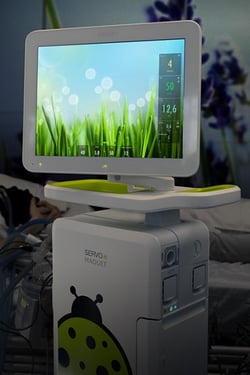 “Fortunately, with Getinge’s NAVA technology, these problems were effectively avoided. The application of this technology also reduces machine time, as the withdrawal time is 3-5 days shorter than that of the traditional mechanical ventilation”, says Dr. Limin Zhu.

After months of effective treatment and care, the sisters were finally discharged from the hospital to thrive just like other little ones, in the care and companionship of their parents.

“The skills of our medical team and the amazing NAVA technology helped making a true lifesaving difference here. We are glad that we could help give the twins a chance to continue their lives in freedom, as separate individuals”, says Dr. Limin Zhu.

Getinge’s NAVA technology may not be available in all markets.