Little Isak came to the world after several painful days for his mother. At first, Getinge employee Jacob Dahl could only watch helplessly from the side, until he eventually found a few familiar things in the operating room that would help distract his partner, and him, during the acute C-section. 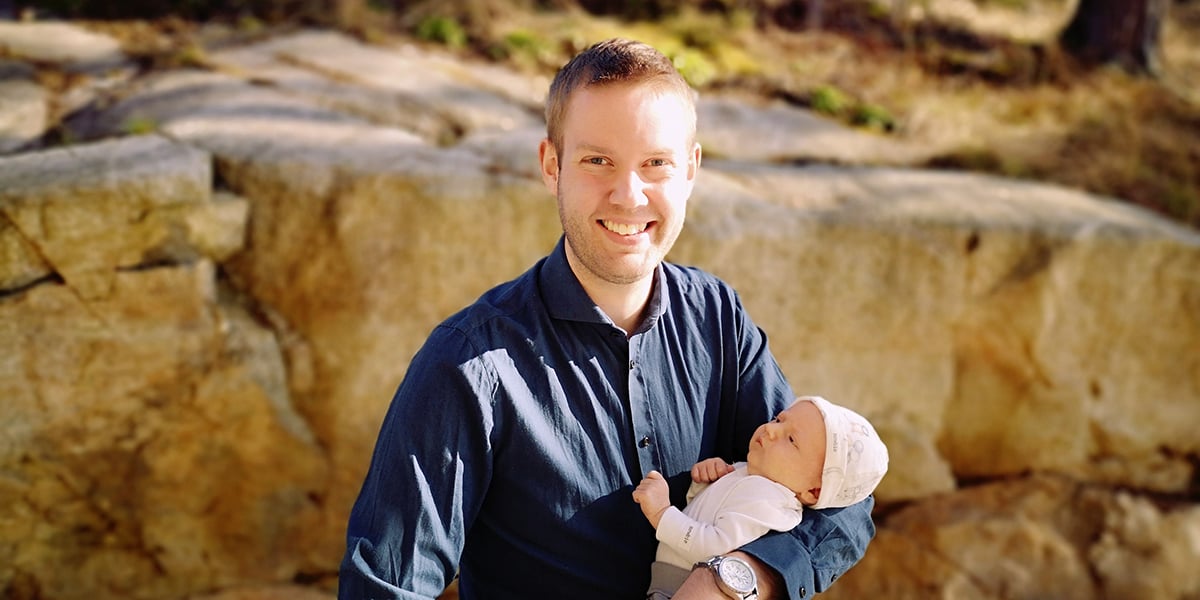 Beginning of March Jacob Dahl and his partner Emelie arrived at the hospital for a planned induction of labor. Due to complications, they had to wait several days and Emelie’s pain got worse and worse.

“It was dreadful to just stand on the side and watch, unable to help her. I could see that the morphine and Epidural was kicking in but she was still in some serious pain. I was really worried both for Emelie’s sake and for our unborn baby,” tells Jacob Dahl, Supplier Quality Engineer at Getinge.

In the end, an acute C-section was the only option. Jacob packed their bags and they hurried off to the operating room (OR) where he got a chair next to Emelie.

“I watched as they transported Emelie into the OR and anesthetized the lower parts of her body. She was about to have her first surgery ever, and on top of that she would stay awake during the entire procedure.”

Emelie asked Jacob to talk about something else to distract her from the uncertainty from the ongoing C-section. Without a doubt, Jacob was in need of distraction too.

“That’s when I realized she was laying on a Maquet operating table from Getinge, my employer. The next thing I saw was a very familiar anesthesia machine in the corner of my eye.”

There it was, Flow-c, Getinge’s compact anesthesia machine – designed to ease the daily work for hospital staff and provide safe treatment for patients. The device consist of thousands of components, and a few very intricate circuit boards.

“I’m a Supplier Quality Engineer and spend my days communicating with the suppliers and improving the components for our Flow anesthesia machines, making sure there are no problems. I know these machines by heart, and even if it was not needed during Emelie’s procedure it was still comforting to just see it standing by, being 100 percent confident that it would work if my loved one needed to depend on it,” says Jacob.

He started describing the technology behind it to Emelie, going deep into details about the circuit boards, plastics – what it consists of and how every little part works.

“I wouldn’t say she was amused by the somewhat technical topic. She was still uneasy about the ongoing procedure, but listening to my voice describing something I am extremely confident with was a bit of a game changer. It immediately relaxed her and made me feel calmer as well.”

“We are all healthy and in the end all the pain was worth it because of little Isak. The medical team who delivered him was fantastic, and Emelie is such a heroine,” says Jacob.

Find out more about the Flow anesthesia machines