Getting ill is something everyone wants to avoid, especially during a pandemic. Getinge employee Sheng managed to escape death after a severe cerebral bleeding in the midst of the COVID-19 outbreak and now he and his colleagues from Suzhou shares their story. 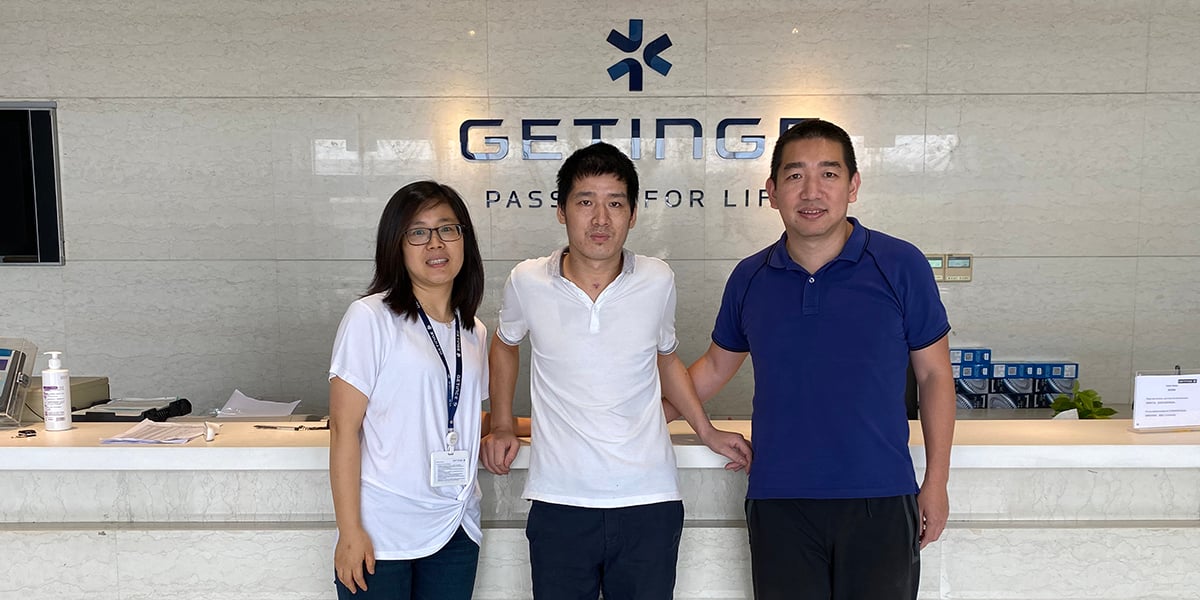 One day in the beginning of April, shortly after the daily lunch break in Getinge’s Chinese factory in Suzhou, Sheng got a sudden headache. He took off to the rest room and started vomiting.

“I felt terrible ill. This is the last thing I remember before losing consciousness,” says Sheng.

Luckily, some of his colleagues were in the rest room and shouted out for help.

“I was in a meeting when I found out and my first reaction was: we have a COVID-19 case. I ran down the hallway and when I saw Sheng on the floor I realized this was different,” tells Shukun Liu, Managing Director at the factory where Sheng assembles operating tables on a daily basis.

While Shukun and his colleagues looked after Sheng, Jill Huang, the local HR Manager, called for an ambulance.

“As it arrived we were told Sheng was suffering from cerebral hemorrhage, which he would find out first several days later when he woke up in the intensive care unit (ICU),” explains Jill.

Sheng’s life was in great danger and the ambulance brought him to the closest hospital where he was first examined and then had an urgent surgery to stop the bleeding in his brain.

At that time, Sheng’s wife had arrived to the hospital and both Shukun, Jill and a few other colleagues where there during the entire procedure to comfort her. The surgery went well, and Sheng was moved to the ICU for further treatment.

“I remember waking up in a world of pain. My body was full of medical devices such as intubation and assisted ventilation,” says Sheng.

He would stay in the ICU for no less than 28 days before he could be transferred to a general ward. During the pandemic, no visitors are allowed physically, so Sheng did not get to see his family in all this time. However, every afternoon a camera passed every patient’s bed for a couple of minutes each. This way, Sheng’s parents, wife and colleagues were able to make digital visits from outside.

“A doctor helped the patients nod or wave at the camera, and they knew there was someone on the other side of the wire waving back at them. This was very emotional, a great way to solve visits during the pandemic. We did all we could from the outside to encourage Sheng and when we finally saw him smile and say a few words we knew we were getting through,” says Shukun.

The digital visits were short, but still something caught Jill and Shukun’s attention.

“There is so much critical equipment in an ICU, crucial for the patients’ lives. When we spotted Getinge’s Servo ventilators created by our colleagues in a factory in Sweden, which support patients who cannot breathe on their own, it gave us confidence and we knew Sheng was taken good care of,” tells Shukun.

Sheng and his wife comes from the Henan province where their parents are farmers. They moved to Suzhou three years ago, with the aim to work hard to be able to pay their daughter’s school fees and the rent of their small house.

“This sudden illness hit the family hard financially. We immediately decided to help and temporarily cover the financial burden until the insurance payment arrived,” tells Shukun.

“It is important for us at Getinge to take care of our employees, especially in such an emergency. And we are almost like a family at the Suzhou factory. The safety and wellbeing of our employees is top priority.”

On May 6, Sheng was discharged from the hospital. He is not yet fully recovered and it will take several months before he can return to work. But he recently stopped by the factory to say hello to his friends.

“I am so grateful for all that they have done for me,” he says. “It was scary to be in a hospital during a pandemic, but knowing that what we do at Getinge let the brave doctors and nurses continue focus on saving lives really makes me humble and proud.”